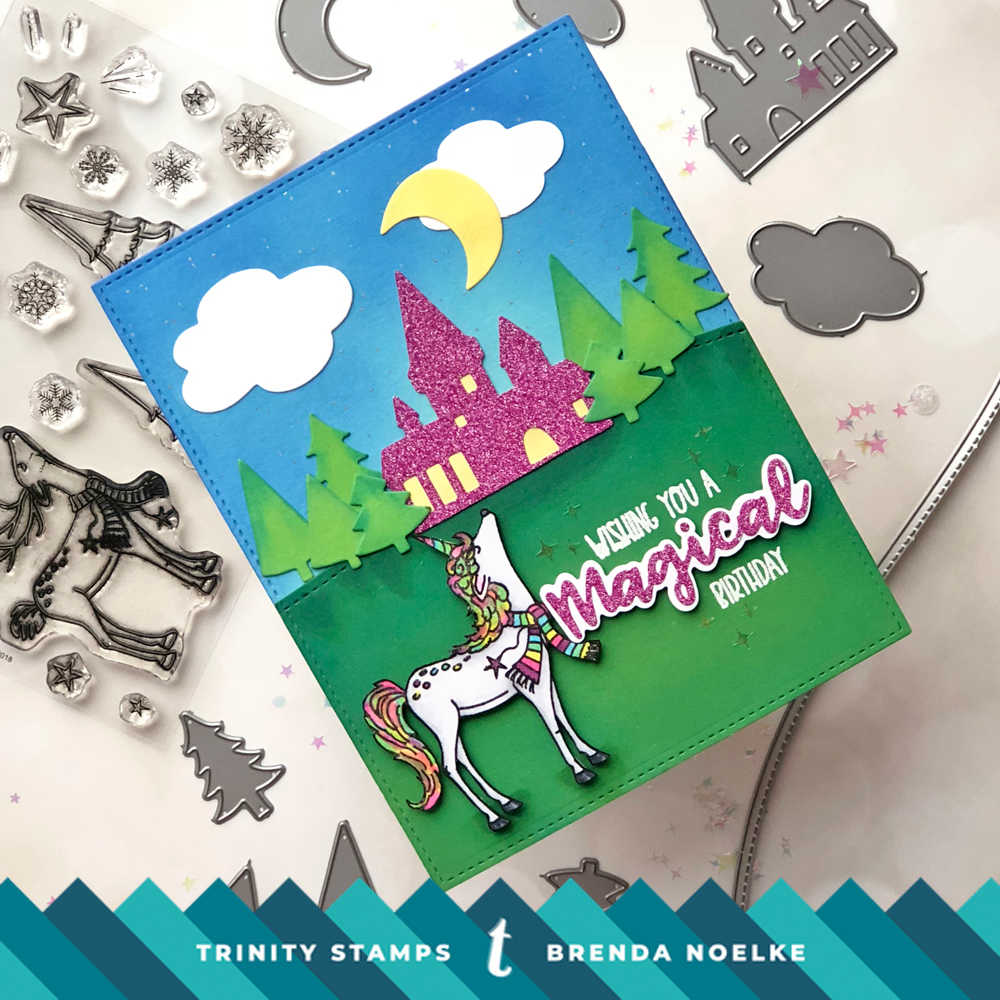 My youngest niece will be six years old next week & she adores unicorns (& cats, but we won’t go there)!! She was actually a unicorn for Halloween this year. I decided to try my hand at creating my own unicorn by editing the deer from the Joyeux Noel stamp set & I think it turned out pretty good!!

I started off by stamping the deer from Joyeux Noel with Momento Tuxedo Black Ink. I masked off the top of her head and the bottom portion of the tail, so I could modify them. After drawing on the mane, tail & horn using a Copic Multiliner, I colored her with a rainbow of Copic markers and then fussy cut her out. I also added some Clear Wink of Stella to the horn, mane, tail, spots and scarf. For the background of my scene, I cut a panel of blue and green cardstock with a stitched rectangle die and then used the hill from the Castle Scene Builder Dies to cut the top edge of the green cardstock. I ink blended Pine Needles and Blueprint Sketch Distress Oxide Inks onto the panels using the new Blendability Brushes. A couple of Copic markers were used to create shadows for the castle, trees and unicorn. I die-cut the other elements from glitter paper and cardstock using the Castle Scene Builder Dies and adhered them as shown. The “Magical” portion of the sentiment was die-cut from pink glitter paper and white cardstock, using the Magical Sentiment Coordinating Die Set. After figuring out placement for the unicorn and magical die-cut, the remainder of the sentiment was stamped directly onto the background panel with Versamark and heat embossed with white embossing powder. The unicorn and magical die-cut were popped up using foam adhesive. A silver gel pen was used to create some stars in the sky. Lastly, a sprinkling of iridescent stars around the sentiment, from the Magical Expecto Patronum Glitter Confetti Mix, completes the card. 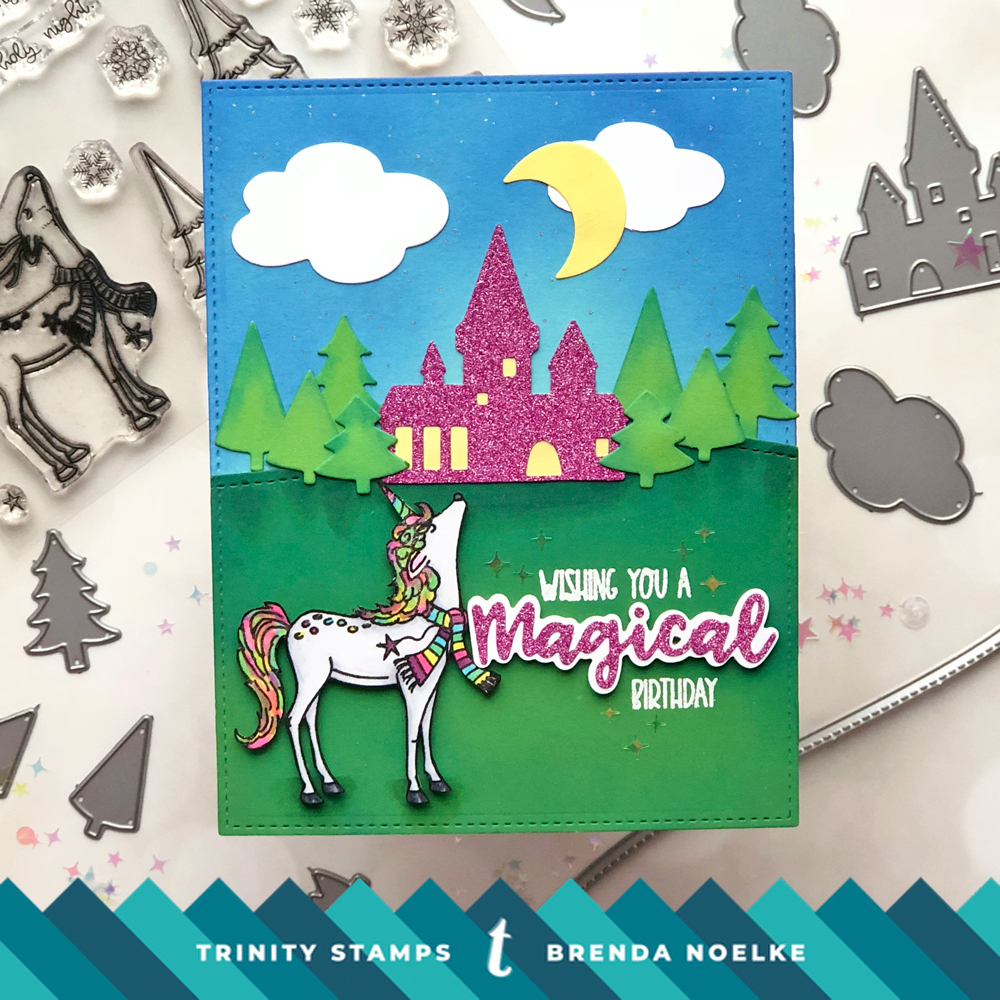 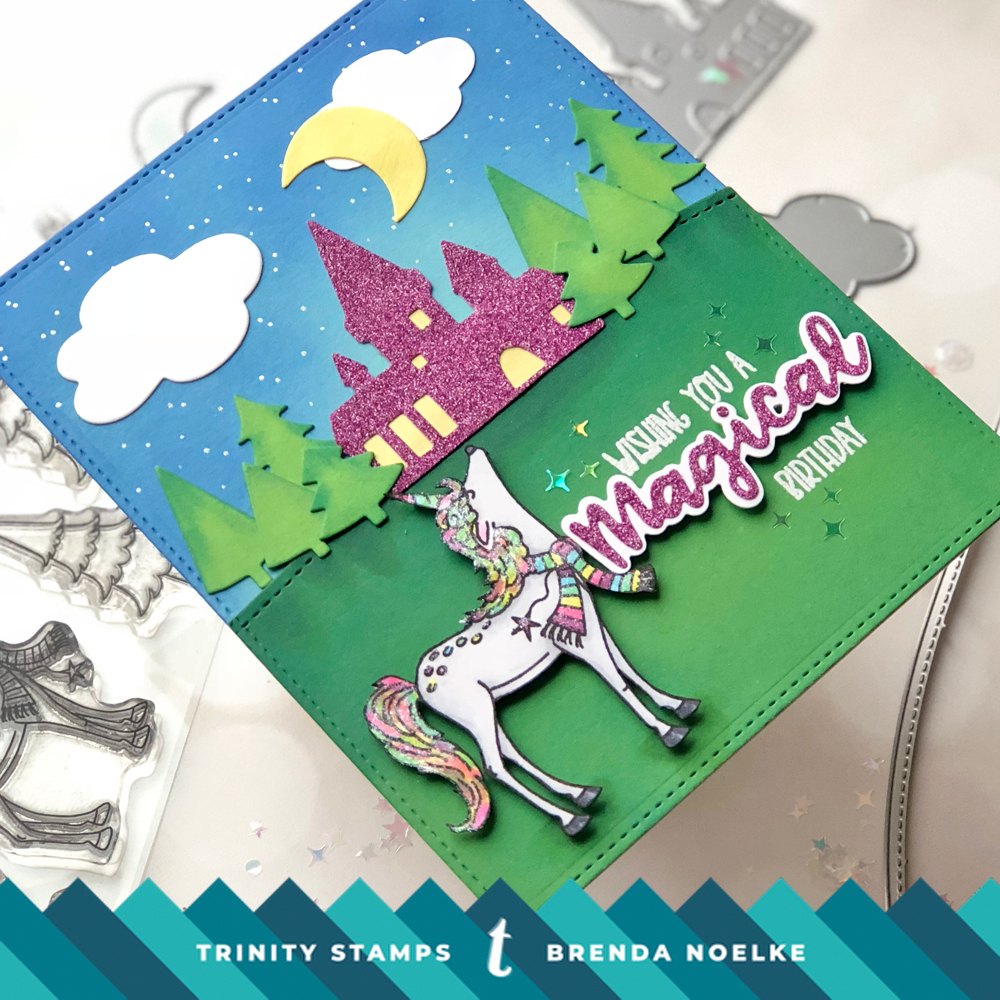 I had so much fun making this card!! I sure hope Sarah likes it!!

Have a great weekend and I’ll see you next Thursday!!