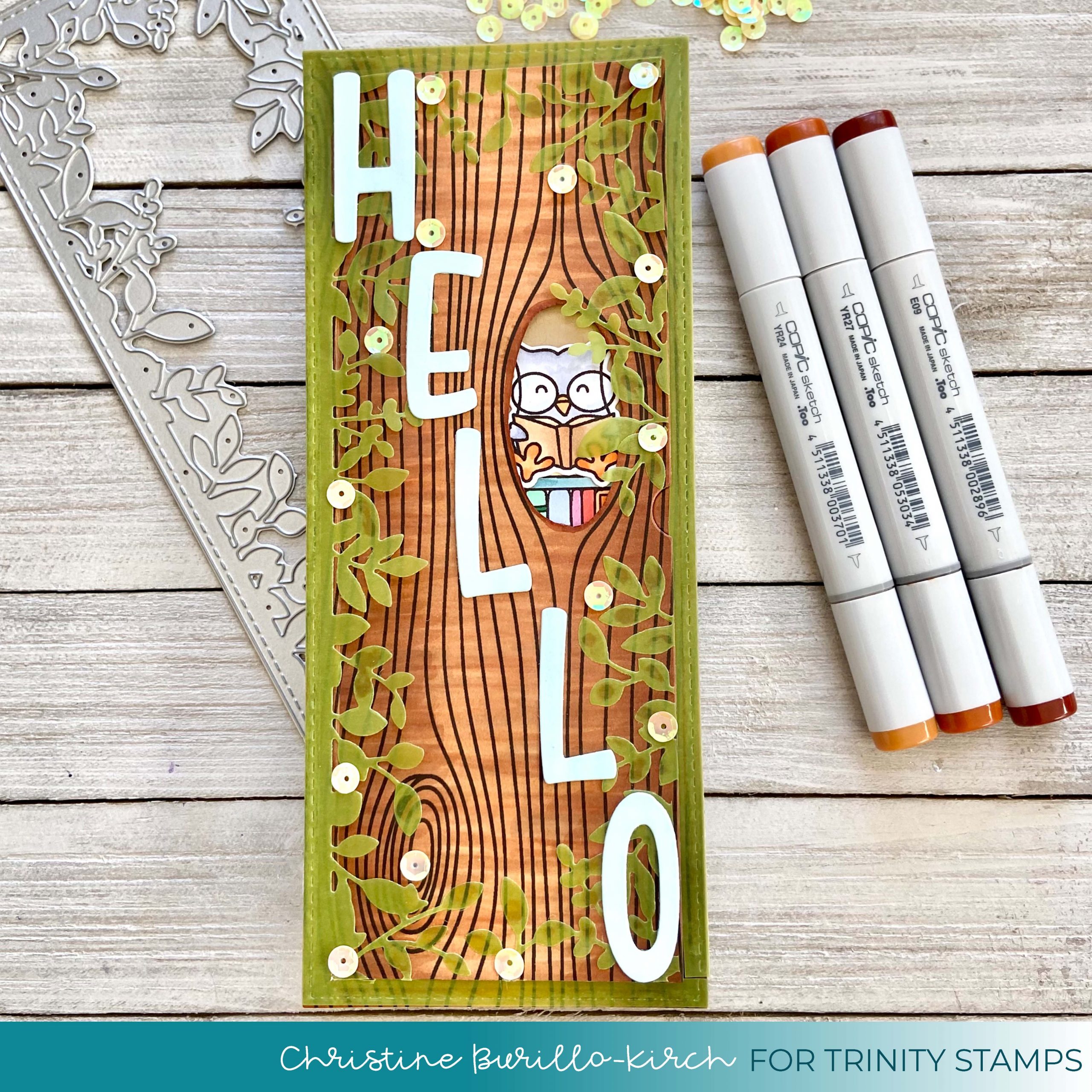 First I stamped the Woodsy Background stamp onto some Neenah 110lb cardstock, colored it with several copic markers: E57, E37, E35, E34 and E31.  Coloring the woodsy background took quite a bit of time, but was fun, I simply streaked color on from the lightest shade to the darkest shade and then went back in with the lightest color to smooth it all out.  I then die cut it with the large panel die in the Lift the Flap die as shown below.  I then fussy cut a hole for the owl to peek through.

I wanted the inside of the slimline card to a wood tone, so I die cut a slimline panel out of kraft cardstock with the Quilted Cover Die. I used the 6×9 Quilted Pattern Trio Stencil set to add some gold hearts (Nuvo Gold paste) to create a look that signified “home” and “warmth”.

I stamped and die cut the owl, books and giraffe from the Tall Tales stamp set onto some Neenah 110lb cardstock. I colored the books with different colored markers that I had in my stash (Stampin Up) and after aligning the books and owl, realized that I had to cut off part of the books as shown below so that the owl could peek through to the front of the card. The owl & giraffe were colored with copics; C5, C3, E31, E34, YR24, YR27 for the owl and E09, YR24, YR27 for the giraffe.

I then die cut the leafy frame using the Foliage Frame die out of green vellum that I had in my stash. I had to cut off the top, bottom and right panel leaves from the frame and glue them directly onto the woodsy front panel so that I would still be able to open the flap. I glued the vellum frame directly onto the outer frame of the lift the flap panel as you can see in the photo below:

To finish the card I added several yellow sequins that I had in my stash and die cut a hello out of pale blue cardstock with the Marshmallow Alpha dies. The sentiment inside the card was stamped and die cut using the Tall Tales stamp & die set.

Thank you so much for stopping by, I hope that you will give the Lift the Flap die a try; making interactive cards are so much fun!