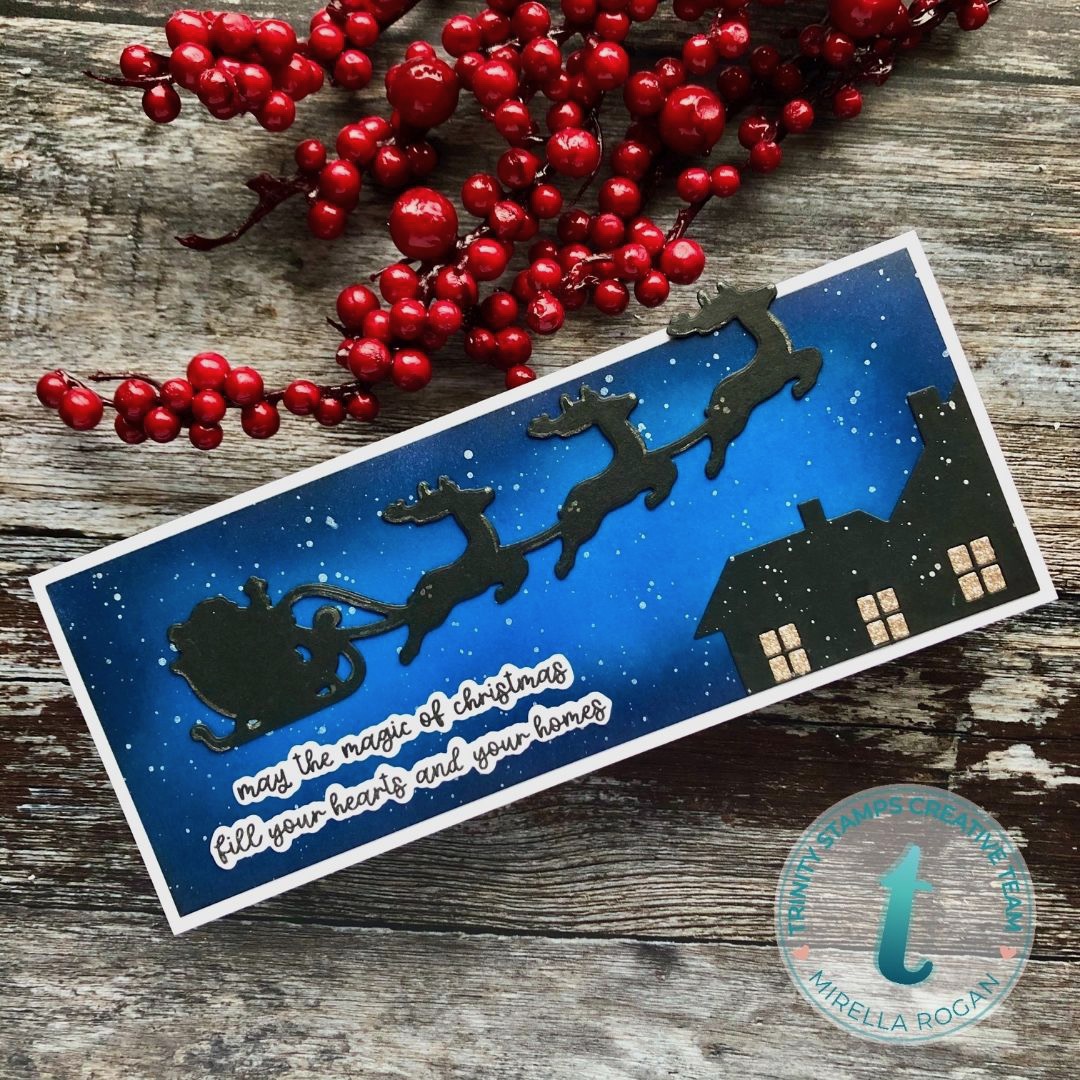 Hi Everyone, Mirella here again! Today I want to show you that coordinating dies in some cases can be as fun to use on their own, as the stamps themselves.

The very first moment that I saw the Slimline Christmas Magic Coordinating Die set, I straight away knew that I was going to use it much sooner on my cards than the actual stamp set itself. And, my dear Friends, I was not wrong!

First things first, I created my night scene, using Distress Oxide inks and my beloved Blending Buddies. Done and dusted in a breeze! Next, I cut out Santa’s sleigh 3 times out of thick black cardstock, and adhered all layers together, to create a strong dimensional focal image for my card. I wasn’t fully happy with the 4 reindeer pulling the sleigh, so I cut one off (sorry! I promise that no reindeer were hurt in the process!). I think the slightly smaller image fits this design better.

To add to my scene, I used a few houses from the Slimline rooftops border die (back in stock soon!), These were only created with one layer of the same black cardstock, as I wanted them to blend into the background more, and to stand out less than the sleigh. For some additional interest, I used gold glitter cardstock for the windows.

To add some playfulness to my design, I decided to make the first reindeer look like he’s flying out of the scene & the card – I think this little detail really adds to the overall look of the card. You almost want to keep staring at it, to see Santa fly away into the night, don’t you?

For some final touches, I splattered the card liberally with white and silver paint, for snow effect. All that was left to do, was to add the sentiment. And the sentiment is actually the only stamped image on this whole card. I could have used a die cut, but I felt like it would be too much… I messed a bit with the original design again, by splitting the long sentiment into two lines – it’s so fun when you can make products work with your design, and not the other way round!

A few metallic gel pen touches here and there, and the card was ready! It was relatively quick to put together, too (providing you don’t mind a lot of layering, die cutting, and inlaying), so it wouldn’t be a terribly bad idea for mass producing, if that’s something you like.

What do you think? Have you ever used your coordinating dies in such a way, on their own? I’d love to hear your ideas!

As always, you can find the full list of supplies I used over at my blog.