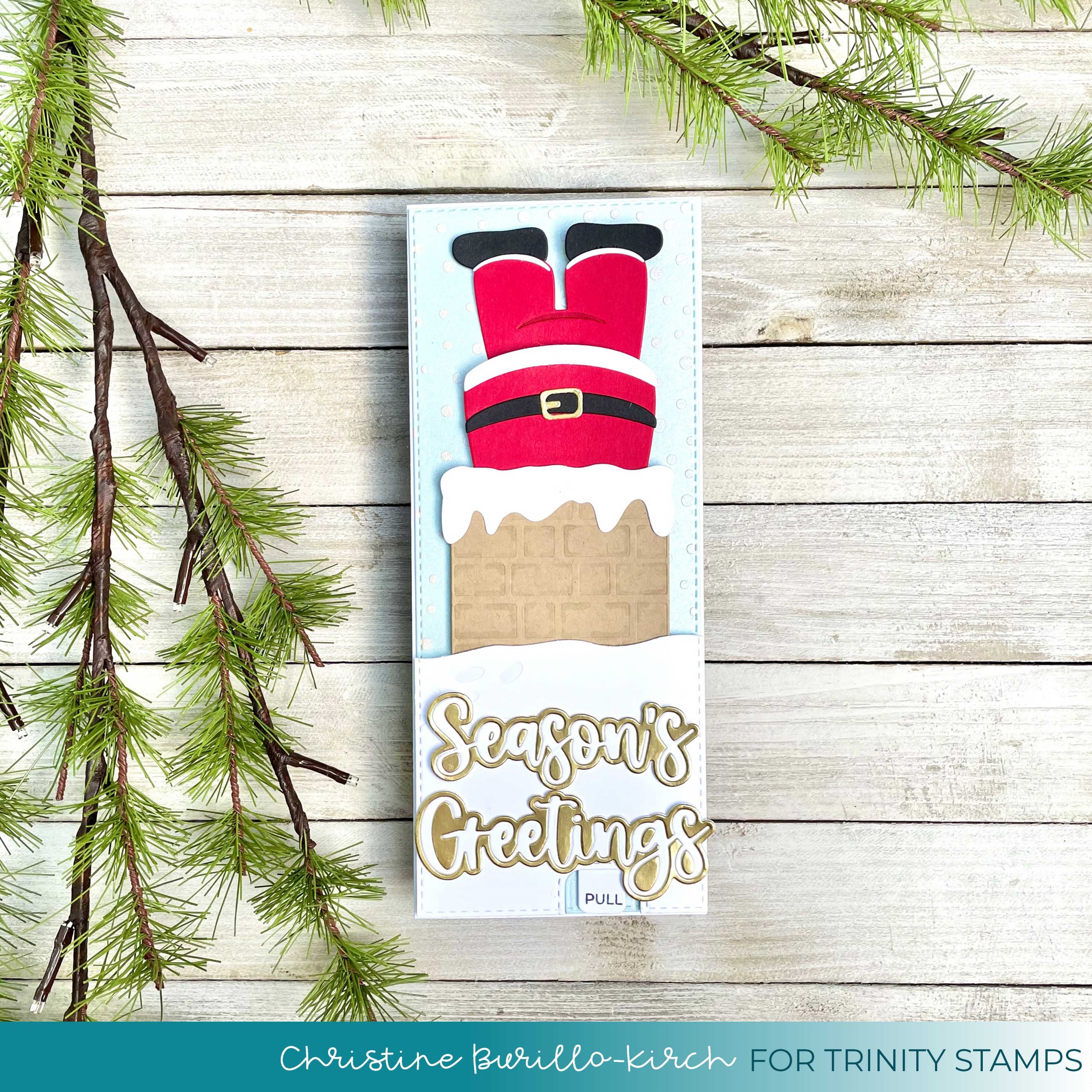 Hello there, Christine here with an interactive slimline card that uses the Stuck Santa die set and the Season’s Greetings Script Cut & Foil die set from the new Treetops and Trimmings Release!  I had so much fun making this and I barely had to make any modifications to making this card interactive- I used pieces from the Slimline Twist & Slide die set as I’ll show below.

I die cut the long tab from the Slimline Twist & Slide die set and then only used the notch from the same die set to cut a notch in the snowy bank (I’ll get to that in a minute!). That’s it! There is one moveable hinge and one immobile rotating anchor to allow the mechanism to work. I had to cut down the long pull tab on both ends. I attached the right side Santa’s pants with a brad through the hole on the pull tab (moveable hinge). I placed the brad through the left side Santa’s pants and a hole I made the slimline snowy panel; this allows the pants to only rotate, but not move up or down nor side to side (rotating anchor). Now when you pull on the tab on the bottom, Santa’s pants will have partial movement as if he were wiggling to try to fit in the chimney!

The rest of the card is more straight forward, there is no sliding track per se, so to not have the pull tab fly all over the place, we are confining the pull tab to a runway flanked by pop up foam pieces as shown above. Once you adhere the pieces on top of the foam, the pull tab is truly confined and can only move up and down.

I partially die cut a snowy roof from the Stuck Santa die set so that the die cut piece was longer than the die given in the set. I used the notch die from the Slimline Twist & Slide die set to cut a notch in the snowy roof (shown above).

Now the fun part of assembling! You only want to make sure that you don’t impede the movement of the pull tab, so you can see in the first photo that the chimney only has foam dots on one side to hold up the piece. I kept the rest of the card really simple and did a little shading on the chimney, die cut the sentiment with the Season’s Greetings Script Cut & Foil die set and adhered everything together. Head over to Trinity Stamps’ Instagram if you want to see a video of the movement.

Thank you so much for stopping by- I hope that you will give this simple interactive card a try and that it makes you smile!