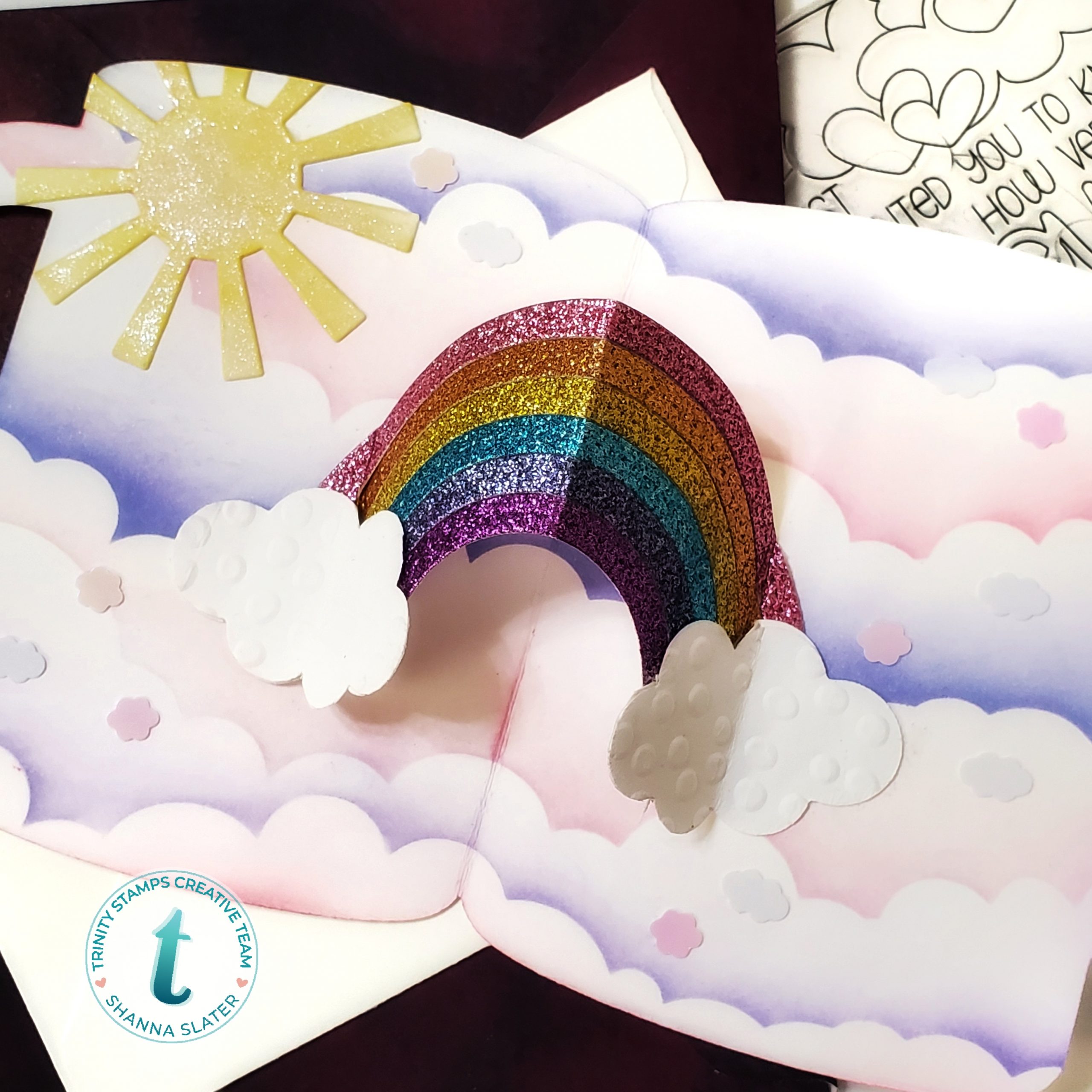 Hello and Welcome!  This is Shanna with Caffeinated Craftiness here today to share another fabulous Trinity Stamps project!  Today’s project features a mix of fun products from Trinity Stamps that is sure to inspire! 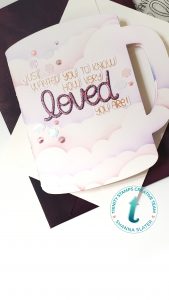 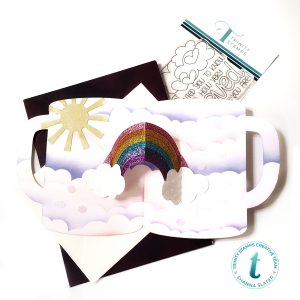 Ok, y’all know I am ALL IN for any caffeinated project right!?!  This card was inspired by an idea from my sweet friend Taniesa, the owner and crafty-person extraordinaire behind Trinity Stamps.  The idea to pop-up the rainbow was absolutely genius and so much fun to do!

To start with you need to die cut the rainbow dies out, including the sounds and base.  I used different colors of glitter cardstock and saved my additional completed rainbows for a future project (coming soon), but you could just as easily die cut out of white cardstock and color it up in your medium of choice!

After the die cutting is completed, score the base of the rainbow in half.  Them adhere the rainbow rungs to the pre-scored base.  After they are all attached, score through the entire die cut again directly in the middle.  Pre-Scoring makes it easier to score and fold the thick layer of cardstock in the end.

Next add the clouds to each side of the rainbow.  Symmetry is fairly important in this stage, so try and make sure they are about even on each side.  Now you get to decide where you want to score on the rainbow.  My first version, as photographed below, only scored on the clouds.  That does work, but the rainbow as a little to packed for me as a pop-up so I carefully pulled it off my card base and rescored onto the rainbow itself on each side to glue to the card base.  It allowed a smaller peak, which was more visually appealing to me for this project. After all the scoring is done, set it aside to work on the base.

The base is created from a die cut Coffee Mug card die, and the Puffy Clouds Slimline stencil.  I inked up both sides of the mug die using my Blending Buddy Brush and distress Oxides.  I alternated colors between Kitsch Flamingo and Shaded Lilac.

After all the clouds were stenciled on both sides of the card, I adhered the rainbow to the inside.  For the rainbow not to show while the card is closed, the middle fold cannot be placed higher that the outside edge of the card.  So I like to fold my rainbow in half, line the middle edge up on the edge of card base, then slide it down a little so I know it will remain hidden with the card closed.  I glue one side down at a time, taking care to only glue down the flaps that were created with the score lines on the clouds.

Now let’s work on the front of our card.  I am absolutely in LOVE with the So Very Loved stamp and Coordinating dies.  I mean, the stamp is epic in it’s own standalone way—but the dies is where the party is at!!  The coordinating dies allow you to use the stamp set in so many ways!!  For this card I die cut the sentiment off the stamped image, after having already heat embossed it in Rose Gold embossing powder from Inkon3.  I then die cut the word loved from both the word dies included in the set.  One creates a thin shadow for the other and the effect is amazing.  I lined up the sentiment as it appears in the image and glued it to the front of the card.  LOVE!!!!

Finishing touches were a smattering of Puffy Clouds embellishments and some Crystallized Unicorn Tear rhinestones.  I also opted to add some puffy clouds sequins to the inside of the card too!!

Whatcha think??  Have you ever made a pop up card out of a traditional die??  I would love to hear about it in the comments below!

Thank you so much for stopping by and supporting Trinity Stamps! I will be back again soon with another fun Trinity Stamps project!  For loads more inspiration, be sure to check out the Trinity Stamps Instagram and Imagination, Inspiration, and Conversation Facebook group! I hope to see you again soon.  If you enjoyed my project today, be sure to follow me over on Facebook and Instagram as well to keep up with all my caffeinated adventures!  Until next time!! ~Shanna