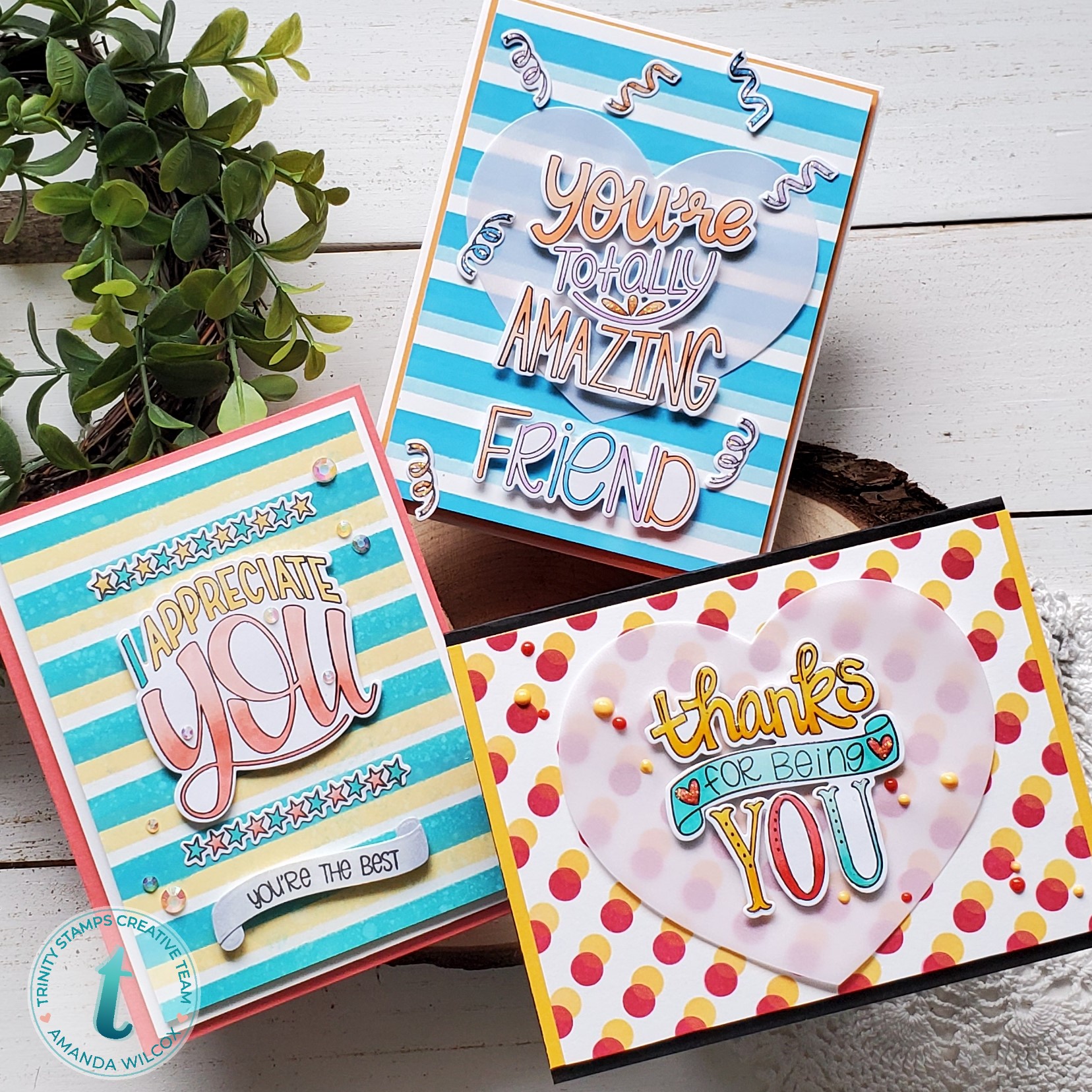 Hello again! It’s Amanda from Twiddler’s Nook joining you today for a bit of a longer post featuring 3 super fun cards using a bunch of the new goodies from the Spring Break Release that went live last week! The stamps sets are Totally Awesome and So Appreciative, while the stencils I used are the straight stripes and polka dots. Now let’s get to how they’re made!

For this first card, I cut an orange panel and popped it up with foam tape, then also popped the striped panel up as well. I die cut the next-to-largest nested heart from iridescent vellum and popped the sentiment up on it. I hid liquid glue behind the image to adhere the heart to the card front. I popped up the word friend and thought the card looked a little plain so I went back and added some of the curled ribbon from the set. I added Stickles to these for a little shimmer on it.

For this card I made my cardbase black, cut a strip of orange cardstock to 4×5.5 and popped it up with foam tape. I then attached my stenciled panel and die cut the largest nested heart die from iridescent cardstock as well. The sentiment is popped up with foam tape and the glue holding the heart down is hidden behind it again. For finishing touches I added glossy accents to the words and scattered Nuvo Crystal drops about the design. The last thing I did was add a little Stickles to the hearts on the banner for some shimmer. Loving this bold color combo!

For this last card I decided to spritz the distress background with water and blot it dry to add a little texture. Then I popped the layers up with foam tape all the way down to the card base. The star strips are adhered directly to the card front but that’s it. For finishing touches I added Wink of Stella glitter brush pen to the stars and banner and then glued some unicorn tears rhinestone embellishments across the design.

These cards were really simple to put together but so much fun to do! The sentiments say it all while giving you an “image” to color and decorate at the same time. The sets are super versatile and have lots of different phrase combos to change the meaning or recipient too. Be sure to check them out at Trinity Stamps!