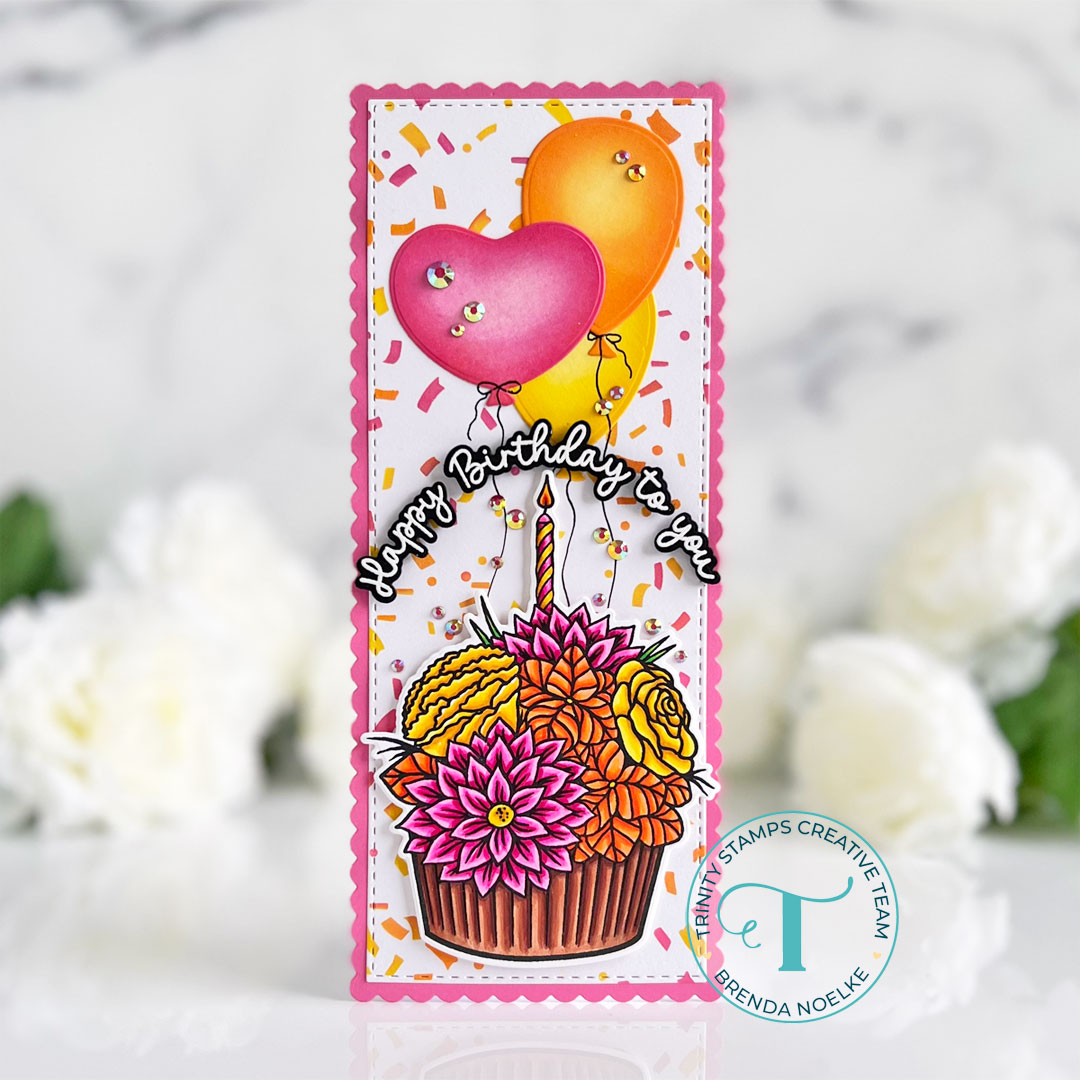 Hello, fellow crafters and card makers!! I’m super excited to be sharing a sneak peek of the new Sweet Summer Celebration Release! Trinity is celebrating 4 years by releasing its sweetest release yet and it’s HUGE!! Big congrats to Taniesa on her 4 year anniversary!!

My card today features the new Cupcake Bouquet and Coordinating Dies with the Celebration Balloons Die Set!! I absolutely LOVE both of these!! So many options!! Plus they work soooo well together!! Let’s get to it!!

To begin, I stamped the Cupcake Bouquet Stamp Set onto white cardstock with Ink On 3 Blackout Ink and colored it with Copic markers. The sentiment, also from Cupcake Bouquet, was white heat embossed onto black cardstock. The cupcake image and sentiment were both cut out with the Coordinating Dies.

I die-cut three balloons from Bristol smooth cardstock using the Celebration Balloons Die Set. I blended Mustard Seed, Carved Pumpkin and Picked Raspberry Distress Oxide Inks onto the die-cuts, leaving them lighter in the center to add dimension. This set contains nine balloons in all different sizes and shapes…some very large ones, as well!

Next, I die-cut a panel of white cardstock with the middle rectangle die from the Slimline Stitched Card Panels and Windows Die Set, then used the same Distress Oxide Inks with the Slimline Layered Confetti Stencil Set on each side of the panel. The largest scalloped square die in the Slimline Scalloped Card Panels and Banners Die Set was used to die-cut a panel of bright pink cardstock. The two panels were adhered together, then added to a white slimline card base.

I drew some strings onto the balloons with a black Copic Multi-Liner.

The cupcake and sentiment were popped up with foam tape. I love how the sentiment curves around the cupcake!!

I sprinkled on lots of Morganite Muse Rhinestones for tons of sparkle and shine!!

I really love how this turned out!!

The Sweet Summer Celebration Release will be available to purchase on June 7th!! Tune in all week for more sneak peeks!! SO. MUCH. GOODNESS!!

Thank you so very much for stopping by!! Have a great day!!