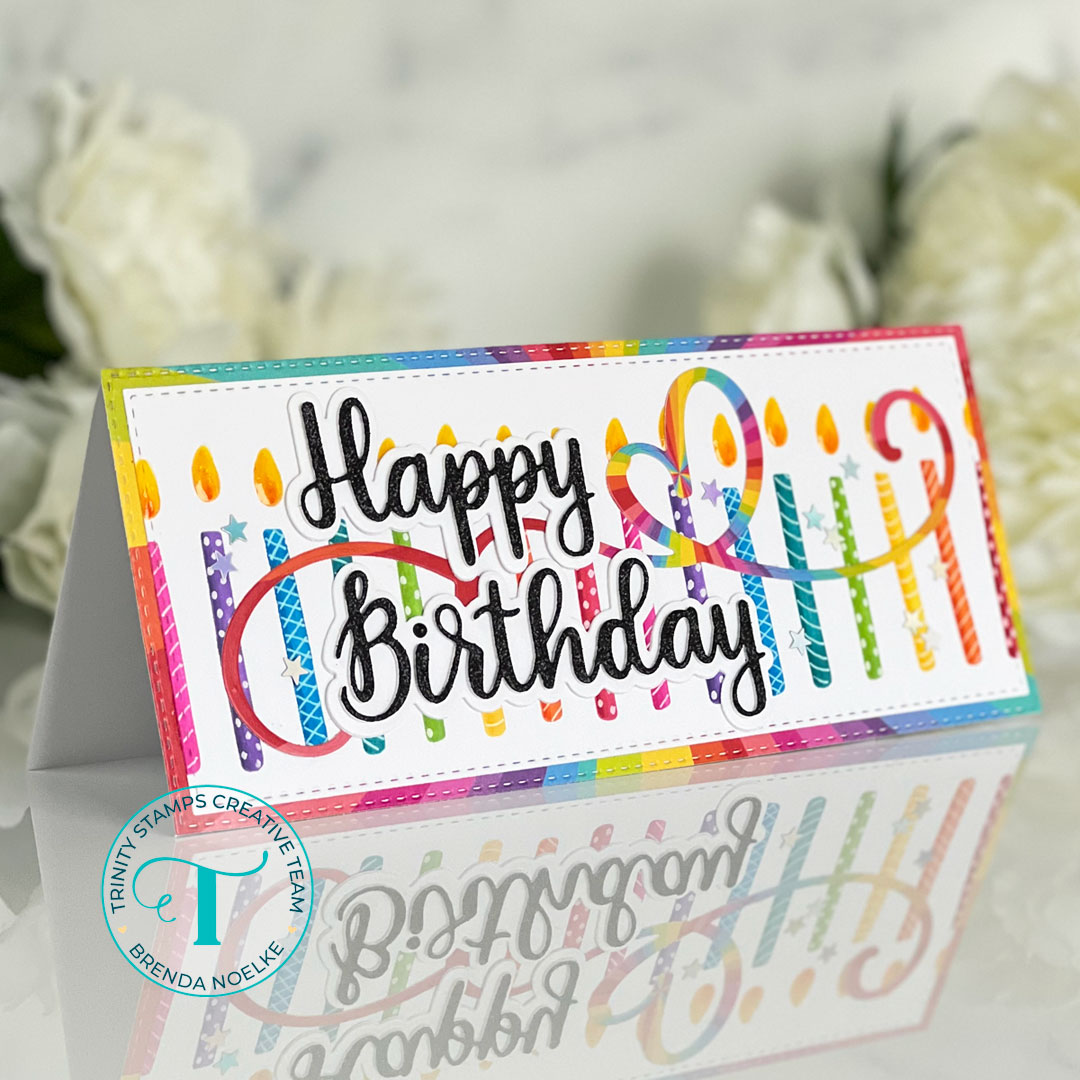 Hello, Trinity friends!! I hope your first week of March is going well!!

It seems like I’m always trying to stock my stash of birthday cards!! I guess that is the occasion that I send the most of!! I have a bright, colorful, rainbow candle birthday slimline card to share with you today!! Whew…that’s a mouthful…lol!! Let’s get to it!!

I began by die-cutting the Heart Swirl Die from a piece of patterned paper in the Rainbow Brights Slimline Paper Pad. I strategically placed it so the heart would cut from the area where all the points of the rainbow met. I also wanted to use this paper for the background, so I tried to keep that in mind. No one will ever know that we die-cut from the center of it!

Next, I used InkOn3 Atelier Inks with the candle stencil in the Cake and Candles Stencil Set. (I cut my stencil in half to make it smaller and easier to work with.) I used Sweet Petunia Pink, My Jam Purple, Peacock Blue, Trinity Teal, Goddess Green, Bee Sting Yellow, Marigold Orange and Marilyn Red inks with Blending Buddy Brushes. I did mask off the candles on each side of the one I was applying the ink to.

I chose a couple of Copic markers from each color family and added some shading to the candles. This just adds a little bit more dimension to them.

I die-cut the candle and rainbow panels with the two largest dies in the Slimline Stitched Card Panels and Windows Die Set. I added some polka dots and stripes to the candles with a white gel pen and some shine to the flames with crystal glaze.

The cardstock panels were adhered to a white, top-folding slimline card base.

The heart swirl and sentiment die-cuts were adhered as shown. I used a small Black Eyed Bead Bauble for the tittle on the ‘i” in birthday, as I had misplaced mine.

The Oh My Stars Holographic Star Confetti adds the perfect amount of shine and reflects all of the rainbow colors around them.

I really LOVE how this turned out!! Rainbow colors with black and white is always a win in my book!!

Thanks so much for stopping by today!! Have a great Thursday and I’ll see you back here next week!!