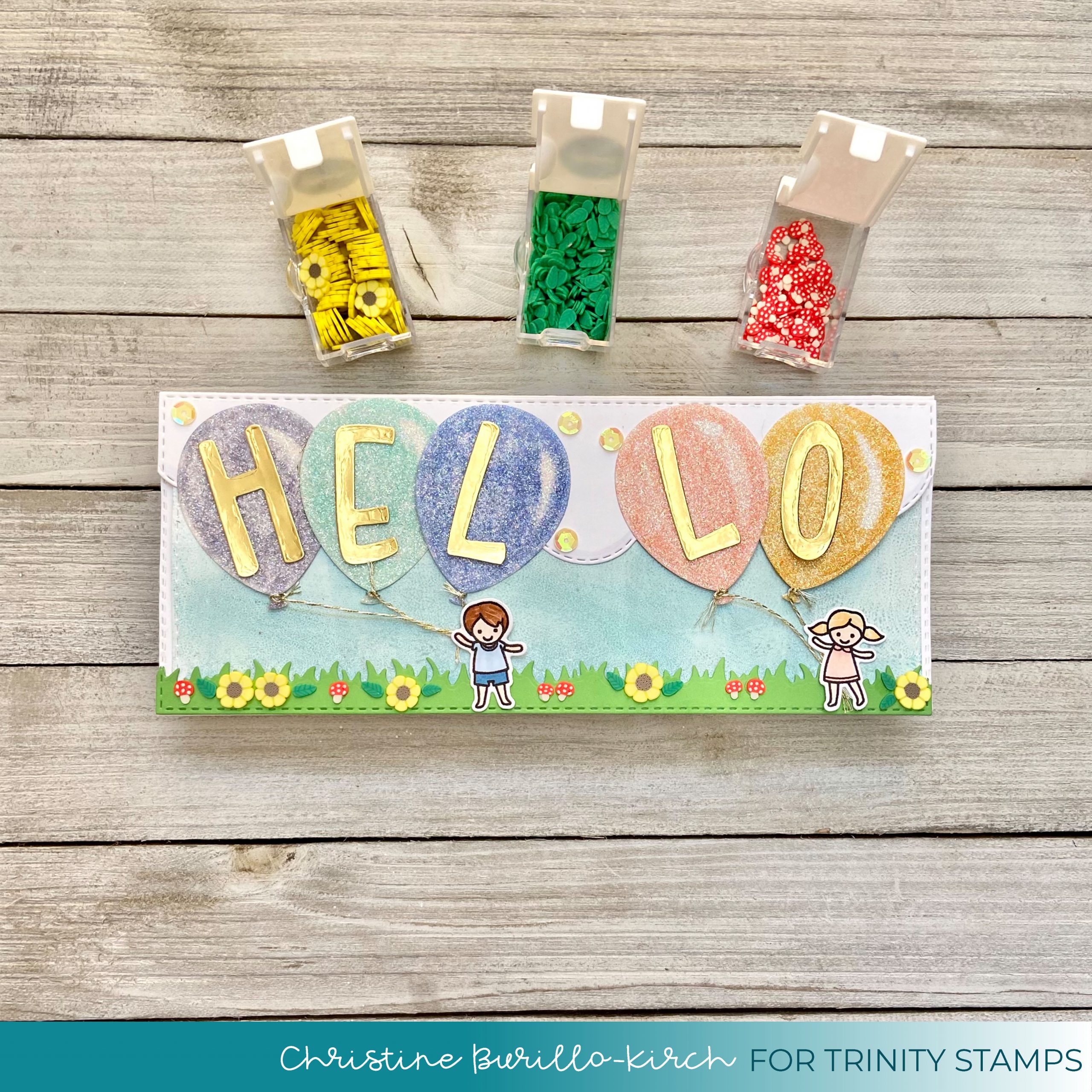 Hello there! Today I’m sharing a background made with a gel press, as well as strategies to get the background to look exactly the way you want it to. Also I’ll be sharing a way to make your own glitter cardstock that I use for creating the balloons on this slimline scene.

Supplies used for this project:

I’ve made an accompanying video that is on our YouTube channel today:

To make the card, I die cut the smallest panel and the largest panel out of cardstock using the Slimline Card Series: Stitched Card Panels and Windows dies. I smooshed distress oxide ink (speckled egg, broken china & tumbled glass) onto the gel press, ran the brayer over it 3 times back and forth and then placed the smaller panel on it to transfer the color. As you will be able to see in the video, the slimline panel is too large for the gel press, so I added color to the remaining part of the panel with color left on the gel press. The result was too blotchy and bold for me, so I toned down the entire panel by ink blending Hero Arts unicorn white ink with a blending buddy over the entire panel.

I die cut some grass out of green cardstock I had in my stash with the Slimline Series: The Great Outdoors Borders & Builders Die Set and some clouds of solar white cardstock using Slimline Rainbow Builder die set. I die cut those down with the largest panel from Slimline Card Series: Stitched Card Panels and Windows dies so that there was stitching all around the card.

I die cut 5 balloons from white glitter cardstock that I had in my stash with the Bunch of Balloons die set and then copic colored each one of them (R20, V22, BG11). I die cut the “Hello” sentiment out of gold adhesive paper with the Marshmallow Alpha dies and glued them onto the balloons. Finally I die cut 2 adorable little kids from the Treetop Adventure die set and did some really simple copic coloring. The embellishments, New Leaf- Clay Leaf Sprinkles, Sunny Seeds Clay Flower Sprinkles and Feeling Mushy- Mushroom Sprinkles mix added a finished touch to the card.

Thank you so much for stopping by; I hope that you like the card I made!