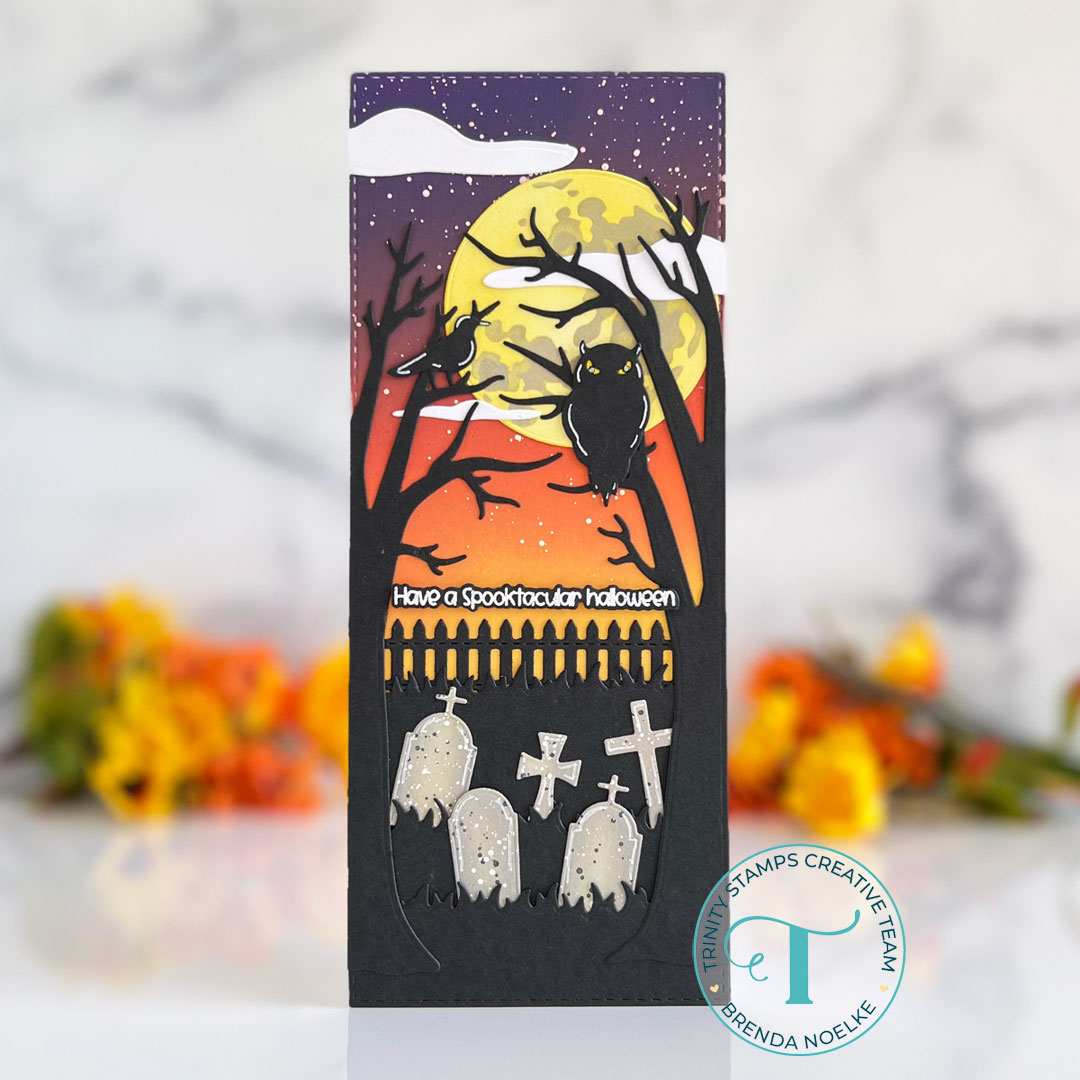 Hello, Trinity friends!! I have a fun and spooky slimline Halloween card for Day 1 of Sneak Peeks for the Autumn Gathering Release!! This fa-boo-lous release will be available for purchase on on Tuesday, August 30th!!

I usually have a stepped-out tutorial, but I was so blown away when I received my design team package that I just dug in full force and totally forgot!! I was so excited to get started!! I will explain in detail how I created my card.

I began by creating my background. I blended Villainous Potion, Ripe Persimmon and Mustard Seed Distress Oxide Inks onto a panel of Bristol smooth cardstock. I splattered it with diluted white gouache and once it was dry, die-cut it with the largest die in the Stitched Card Panels and Windows Die Set.

Next, I inked the new Moon Layers Stencil with Squeezed Lemonade and Pumice Stone Distress Oxide Inks, then cut it out with the smallest circle die in the Man In the Moon Cut & Foil Die Set.

I was super excited to see the new Slimline Spooky Scene Builder Die Set in this release!! I die-cut the trees, owl and bird from black cardstock and the clouds from white cardstock using this fabulous die set. I added yellow cardstock behind the eyes of the owl. The tombstones were die-cut from gray cardstock, inked with Pumice Stone Distress Oxide, then splattered with diluted white gouache and diluted black ink.

The grass and fence were die-cut from black cardstock using the Great Outdoors Borders and Builders Die Set. From here, all of the die-cuts were adhered to the ink-blended background with liquid adhesive. The sentiment (a sneak peek of another set in the new release that you will see later this week), was white heat embossed onto black cardstock and cut out with its coordinating die. It was popped up with foam adhesive. I used a black glaze pen on the owl’s eyes and added white highlights to some of the die-cuts and this card was finished.

Stay tuned for more sneak peeks in the following days leading up to release day on Tuesday, August 30th!! There will also be fun and inspiring Instagram and YouTube hops on release day!!

Thanks so much for stopping by today!! Have a great Thursday!!