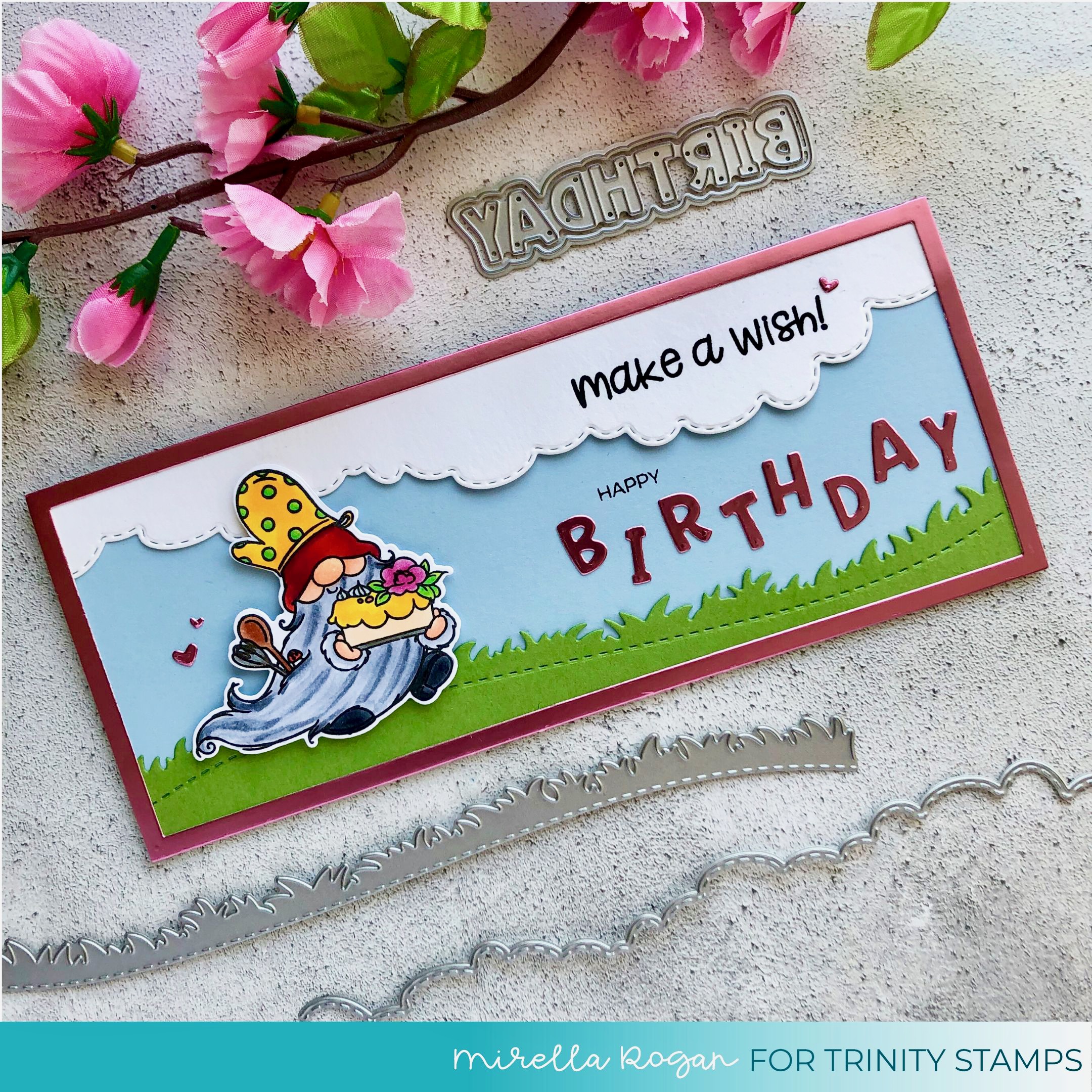 Hi Everyone, Mirella here, and if you like slimline cards (and gnomes!) – you’re in for a treat today!

I don’t know about you, but I am somehow obsessed with the gnome images that are becoming so popular in our crafty world, and – call me biased – I think Trinity Stamps have some of the cutest ones out there! Also psssst… watch this space, in less than 2 weeks there *might* be more joining the existing family! 😉

I used the Just For You gnome on one of my recent cards, so this time I decided to ink up the adorable baker from the Make a Wish set. It’s a great image for all those bakers and chefs in your life, and I think that it works well for masculine cards, too, which is rare and great for such a sweet image!

The card came together really quickly, as I used only coloured cardstock for my scene – no blending (unusual for me, right?)! I went with light blue for the background, a nice juicy green for the grass, and white for the clouds. The Slimline Scenic Border die set helped with the clouds and grass, and the Frame and Fold die set allowed me to create a great frame around my whole scene. Note that when I put the scene together, I didn’t adhere the edges of the clouds and grass, to create a more dimensional look that way.

The cute gnome image was coloured with alcohol markers and some glitter pen for accents. I cut him out with the coordinating die set. I had some fun when colouring, and decided to colour the (what I think is) salt/pepper shaker as a mushroom instead. Or maybe it’s meant to be a mushroom? What do you think?

Once the gnome was adhered, all that was left to do was stamping the sentiment, and adding the “Happy Birthday”, which I created with a mix of the Sunflower Bouquet Builder Set ( A Sentiment For (almost) Everything could work, too!), and Celebration Borders.

For a final touch, this time I decided to use some little heart die cuts as opposed to my usual sequins or rhinestones. I happened to have the Rainbow Die Set on my desk, and noticed the sweet little hearts in it, so that’s what I used.

And voila, another birthday card ready to be sent to some lucky recipient! Despite the pink, I think it could still work for a guy, right?

I hope you enjoyed this project. As usual – if you have any questions, don’t hesitate to ask, and the full list of supplies used is available on my blog.

Have a great and happy day,