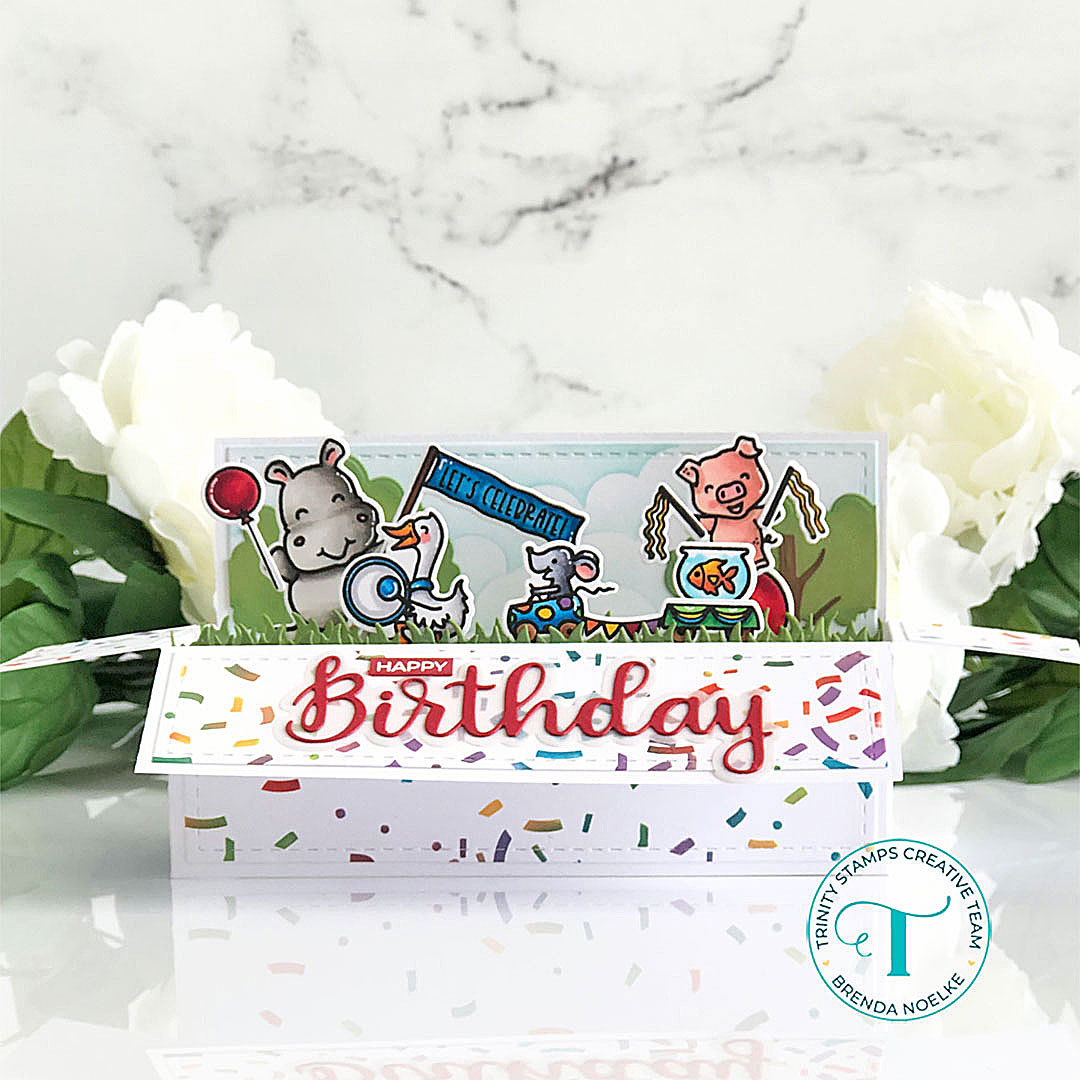 Hello, Trinity friends and happy Friday!! There is a huge month-long celebration going on for Trinity’s 3rd birthday!! I’ve been on the design team since August of 2018 and it has been awesome to work with Taniesa, the talented design team and amazing products!! I’m honored to be a small part of the growth of the company and watch it flourish!!

A special birthday calls for a special card, so I decided to make a slimline wide box card…let’s get started!!

I began by stamping all of the images from the Hometown Parade Stamp Set onto white cardstock with InkOn3 Blackout Ink, coloring them with Copics and cutting them out with the Coordinating Dies.

The Slimline Layered Confetti Stencil Set was used with Distress Oxide Inks and Blending Buddy Brushes to add multi-colored confetti to a panel of white cardstock. Next, I die-cut all of the elements in the Slimline Wide Box Card Die Set from white cardstock and the confetti panel. I also blended Oxides onto the background panel and used the Puffy Cloud Layers Stencil to add clouds to the sky. I folded all of the pieces along the score lines and reinforced the folds with the Trinity Teflon Tool.

I die-cut the grass and trees from brown and green cardstock using the Slimline Great Outdoors Borders and Builders Dies. I inked on some Oxides with Blending Buddy Brushes to add interest. The “Birthday” sentiment was die-cut from red cardstock and vellum using the Scripty Birthday Dies. “Happy” was white heat embossed onto red cardstock using one of the sentiments from the A Sentiment For (Almost) Everything Stamp Set and trimmed into a narrow strip.

All of the elements were adhered as shown. I added some highlights with a white gel pen and a black glaze pen adds some shine to some of the eyes and noses of the critters.

This is what the card looks like when it’s folded up and inserted into a slimline envelope.

And when it’s opened and unfolded. Such a great way to display a card!!

Thanks so much for spending a bit of time with me today!! Have a wonderful weekend and I’ll see you soon!!